Witnessing the decline in the world and the degeneration on an excelled universal level birthed Darkskin. Originally formed in 2009 and hailing from United States of America but only producing demos which haven’t heard by many. Now, finally Darkskin has come into more of a public light so many more can hear the sound and message that the world needs to hear. Standing against the impurity that has been infesting society lately, such as multi-culturism, LGBT, Antifa, Liberal/Communist beliefs, white guilt and other atrocities that plague the European/American state. The battle which once was said will happen is but reality now and Darkskin produces anthems for the fight.
Darkskin is The Son, the leading member of the project and creator of pure message. There have been others involved but those whom will be unnamed. The Son solely performs on this first release album, “Son Of Hitler”. The mission is to produce sounds of pure hatred and set the world on the right path. This is only the beginning of the long journey of Darkskin.

Current line up: The Son – All 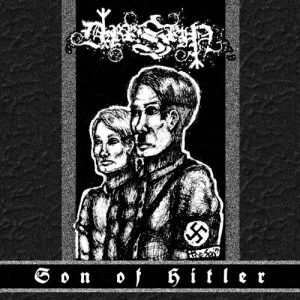